Introducing The Tower Of Zordaz 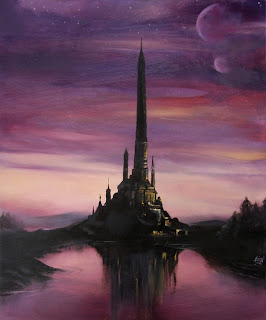 The following is a poor translation from my own notes. As always, feel free to point out any syntactic mistakes you happen to run into.


"When he built his stronghold at the top of the Mountain of Erendûl, more than five hundred years ago, Zordaz was already well known and feared in the whole Old World. The story of his deeds, as well as the rumors about his outstanding knowledge of all things magic were already shrouded in legend, and few dared to pronounce his name. It was commonly believed that to build his Tower, Zordaz had conjured and bound hordes of demons, by means of some utterly powerful spells he had researched by his own. During the following two hundred years, Zordaz conducted uncountable experiments, trained dozens of apprentices, and eventually expanded his power to almost lap the old boundaries of the neighboring Kingdom of Ainor. Then, suddenly, he disappeared. What really happened to him none can tell, although several rumors spread around the Old World: some said he left the Prime Material Plane to look for further knowledge at the edges of the Multiverse, others that he perished in clash with an even more powerful sorcerer, and others that he offended the Outer Gods, and they banished him for his impudence. However it was, his disappearance left a power vacuum in the regions surrounding the Silver Mountains, the people of the Old World hustled to fill. Thousands of settlers came from the neighboring reigns: the Dwarves established the underworld Kingdom of Karag-dûm, while the men set up several villages and castles, then united in the Confederation of the Borderland Marches, and annexed to the Kingdom of Ainor. For three hundred years the Tower has remained forgotten and undisturbed, but this is all about to change. The Dwarves of Karag-dûm claim the Goblins have become bolder in their raids, and the rumors about strange creatures crawling in the night near the surrounding villages grow more and more frequent. A new power is rising over the Mountain of Erendûl, and only a new band of stout adventurers can now stop its ascent."

Email ThisBlogThis!Share to TwitterShare to FacebookShare to Pinterest
Etichette: Background, The Tower Of Zordaz

Dwellers Of The Void