Despite my best efforts to lose the train I eventually managed to leave. I'm now traveling to Florence, and tomorrow I'll be moving to Isola d'Elba with my girlfriend, her brother and her brother's boyfriend. (And yes, this is exactly what I mean to say.) Then on August the 26th we'll fly to Poland, and I will be back home on September the 6th or a few days later. Aside from the fact that I will almost certainly meet Albert (of Terminal Space fame), I also hope to convince the guys at Elba to play a game or two. Hence I spent most of the morning and evening packing up my stuff, and I'm quite pleased by the final result you can admire in the picture. Aside from the very core (3LBBs and dice) I put together a bunch of tables (Jeff's likely doom and carousing, Untimately's random starting equipment, hirelings generated from Meatshields, random NPC names), Castle Vorndrang Level 1, another very cool OPD from Untimately's campaign, 10 copies of my own Adventure Log sheet and 20 character sheets. I can hardly imagine running out of supplies till September. So wish me luck, I will try to write again during the trip, just don't hold your breath. YO.

P.S.: Sorry for the lack of links, I'm writing from the phone. 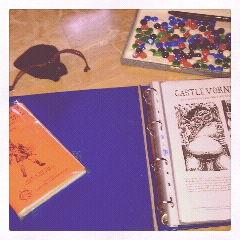 Email ThisBlogThis!Share to TwitterShare to FacebookShare to Pinterest
Etichette: Vacancy

Dwellers Of The Void